The History of the Espresso Machine – The Purest Form of Coffee

For many coffee aficionados, espresso is coffee. They consider it the purest form of the coffee bean. But what is espresso and how did it become so popular today?

Most people know of it due to the proliferation of artisanal coffee shops, but couldn’t define what espresso is if you put them on the spot. The history of the espresso machine and espresso dates back to 19th century Europe.

Espresso is a method of preparing coffee. Specifically, it is a method where highly pressurized hot water is forced over finely ground coffee. This produces a concentrated coffee drink with a distinctly strong flavor. 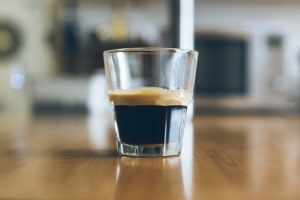 Because good espresso is the product of a consistent and high-quality process, it required the invention of an entirely new machine to produce. The first espresso machines began to pop up in Italy in the 19th century.

Even back then, coffee was big business. In Europe, cafes were spreading all across the continent. However, brewing coffee was still a slow process. It would sometimes take 5-10 minutes for a fresh cup! Being the impatient creatures that we are, inventors thought to create a steam machine to reduce the time it took to brew a cup.

The Invention of the Espresso Machine

The person who invented the espresso machine was Angelo Moriondo of Turin, Italy. He received a patent for it in 1884, but it didn’t become popular due to the fact that it was only used for the Turin General Exposition and wasn’t widely available. Aside from the fact that he held the first patent for an espressomachine, Moriondo doesn’t have much to do with the history of espresso.

That honor is reserved for two men: Luigi Bezzerra and Desiderio Pavoni.

Luigi was a liquor producer and the inventor of the single-shot espresso in the early 20th century. He took Moriondo’s machine and made multiple innovations to it, most of which are still present on modern-day espresso machines. Two of these include multiple brewheads and a portafilter.

Pavoni’s contribution to the espresso machine begins when he purchased Bezzerra’s patents in 1903. After purchasing the patents, he added to the design, including a pressure release valve. This innovation was more for the baristas than it was for the customers, as it prevented them from being splashed with hot coffee.

This is where the word “espresso” came to prominence. Pavoni decided to market this new process for coffee as espresso, meaning “made on the spur of the moment.” As the Pavoni machine became more popular, copycats began to pop up throughout Italy. It’s no surprise – these machines were able to produce at least 100 cups of coffee every single hour. That is a massive speed increase compared to old methods.

Espresso machines would go on to be improved upon in major ways more than a few times. In 1961, a motorized pump was added so the machine no longer had to rely on the strength of the barista. Espresso machines continued to become smaller, more efficient, and more affordable, leading to their expansion out of Italy and into other parts of Europe and America.

The history of the espresso machine is long and storied, but what it did for coffee is the exact opposite. It allowed for the quick production of a concentrated, delicious cup of coffee.

12 Health Benefits and 6 Disadvantages of Coffee (Smashing it!)

What grind do you need for your favorite brew method?

This is the best time to have your cup of coffee

View All Posts In Knowledge